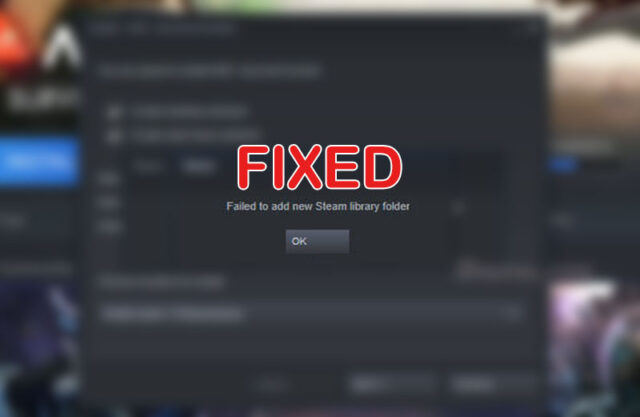 Steam often displays the error “Failed to add new steam library folder” and the installation process is failed to continue. This usually occurs when attempting to install a game using the Steam client on either the default Steam library or a new Steam library on a new disc.

To resolve this error, just pause or cancel any downloads, restore FPS Setting or updates currently happening on the Steam client. After that, try installing a game or adding a new Steam library. It should now be able to continue without displaying the error.

If you receive the error with the additional indicator – “New steam library folder must be writable” this means that Steam is failed to write to the disc drive where you wish to build the new Steam library folder. In the majority of situations, this is because Steam lacks the necessary permissions.

It might be that the disc or directory where you add the new Steam library is set to the read-only mode or that your Windows user account does not have adequate capabilities to access or write to the drive (if it is not an administrator account).

What you can do to resolve the error is as follows:

Moreover, if you see this error failed to add new steam library folder when attempting to install a game on an existing Steam library, you can establish a new Steam library on a separate disc or folder on the same system. Then, install any game on the newly generated Steam library to ensure that the right folder hierarchy is created in the library. Following that, you may move all of your Steam games from the old library to the new one (SteamLibrary>steamapps>common).