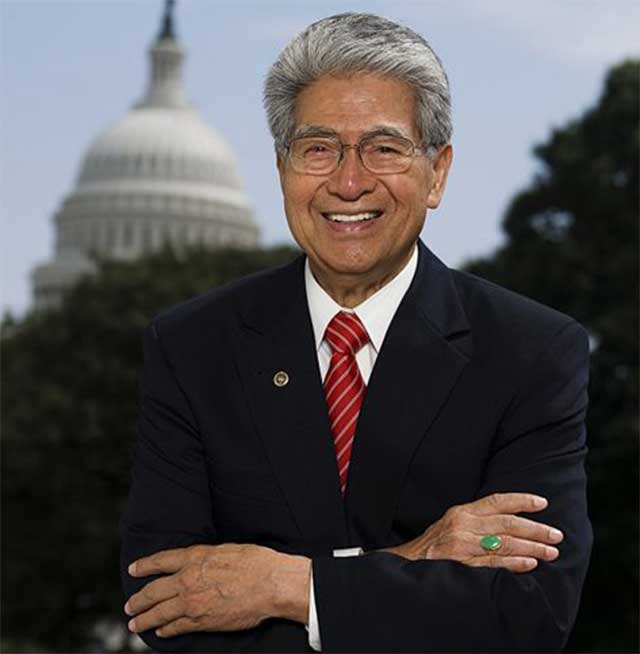 Senator Daniel Akaka, a Democrat from Hawaii, has been a member of the United States Senate since 1990. Senator Akaka was appointed to the Senate in April 1990 and sworn in on May 16, 1990. In November 1990, he easily won a lively special election to fill the unexpired four-year term of the late Senator Spark M. Matsunaga. He was elected to a six-year term in 1994 and re-elected in November 2000 with more than 70% of the popular vote. Senator Akaka serves on several committees, including the Armed Services, Energy and Natural Resources, Governmental Affairs (GAC), Veterans Affairs, and Indian Affairs. He also sits on the Select Committee on Ethics.

Senator Akaka serves on the Energy and Natural Resources Committee, where he was a leader in renewable energy research and development, park and wildlife issues, tropical agriculture and coral reef conservation, ocean sciences and technology, aquaculture research, marine protection and environmental preservation, and marine protection and environmental preservation. Senator Akaka was the Ranking Member of the National Parks Subcommittee.

Senator Akaka’s role on the Armed Services Committee and as Ranking Member of the Readiness and Management Support Subcommittee aims to maintain Hawaii’s excellent relationship with the military. He collaborated with the Defense Department to meet the nation’s needs and security interests in the Pacific and worldwide. Senator Akaka was a veteran advocate who worked to improve services and increase employment and housing possibilities for men and women who have served in our nation’s armed forces. Senator Akaka works to make the federal government more efficient and responsive to American taxpayers. He was a recognized leader in delivering parity and equity to federal employees, postal workers, and annuitants.

He has taken a prominent position in many crucial national security and homeland security sectors as Ranking Member of the GAC Subcommittee on Financial Management, the Budget, and International Security. He was a fighter for the needs of federal employees and retirees. He has worked to ensure the deployment of an effective and cost-effective national missile defense program, protecting against potential missile attacks by rogue states, and advocated for improved controls on sensitive dual-use exports and the protection of critical information at our most sensitive nuclear weapons laboratories. He has fought to ensure the ratification of the Comprehensive Nuclear Test Ban Treaty (CTBT) and to prevent the spread of nuclear weapons technology. Furthermore, he has collaborated with the Administration to strengthen limits on small arms exports to discourage using guns for illicit purposes.

Senator Akaka was a Senate leader on matters concerning the Freely Associated States (FAS) and Pacific US Territories. He has collaborated extensively with national governments, state governments, and federal agencies to address Pacific island and FAS concerns. Akaka had closely monitored the safety and security of radioactive mixed plutonium-uranium oxide (MOX) fuel shipments from Europe to Japan for use in nuclear power plants. He has asked the General Accounting Office to look into immigration procedures in the Commonwealth of the Northern Mariana Islands, and he has collaborated with the US Department of State to discourage worldwide human trafficking.

Senator Akaka was a passionate advocate for indigenous peoples’ rights. He brings the unique perspective of Hawaii’s history and multicultural society to bear in his efforts to promote dialogue and reconciliation between Native Hawaiians and the Federal Government, as well as raise awareness of indigenous peoples’ rights and circumstances in the United States and around the world. He was the head of the Hawaii Congressional Task Force on Native Hawaiian Concerns, attempting to address long-standing issues involving Native Hawaiians’ connection with the United States.

Senator Akaka was a strong supporter of economic and financial literacy, co-authoring the No Child Left Behind Act’s Excellence in Economic Education Act for students in grades K-12. He aimed to broaden his efforts in this area to reach as many people as possible, including college students, military families, low-income families, older citizens, and immigrants.

Senator Akaka was elected to Congress for the first time in 1976 to represent Hawaii’s Second Congressional District. He easily won seven straight elections. He was the first U.S. Senator of Native Hawaiian origin and the Senate’s sole Chinese American member.