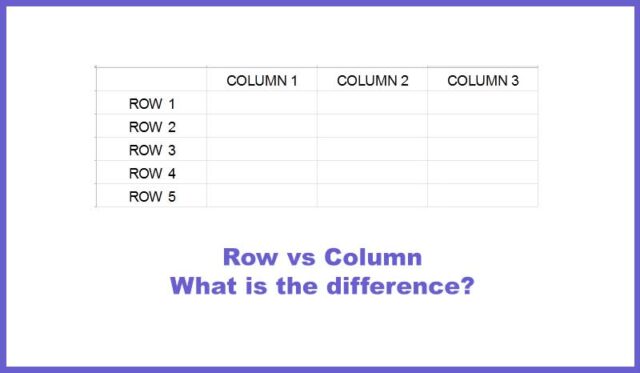 What is a Column?

In a spreadsheet, a vertical series of cells chart, spreadsheet, or table represents a column. It is an arrangement of words, figures, facts.

In comparing column vs Row, the Columns are differentiated bylines in a table, which helps to enhance readability and attractiveness. Columns are primarily written one after another in the continuous arrangement.

Usage of Column in a spreadsheet

In a table or spreadsheet, a row is a series of data placed out horizontally. It is a horizontal arrangement of words, objects, numbers, and data. Data objects are also arranged in a series lying next to each other on the straight line in a Row.

Usage of Row in a spreadsheet

Here is an example of 5 rows and 3 columns spreadsheet

We hope this comparison has cleared many things in mind while comparing rows vs columns in different spreadsheets.